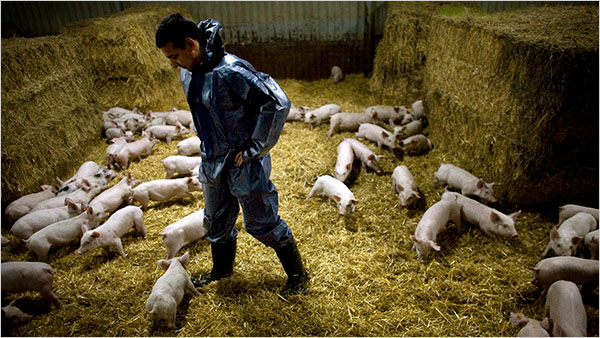 Sorry for an F-Bomb before you even get in the door, but I read something last night that pissed me off so bad that a fuck derivative was the only way to get the point across before moving on to the meat of this blog.  (Prepare for the gratuitous use of meat and meat byproducts as well as the occasional Tourette’s outbursts.)  So, I will now switch gears to why we are clearly one of the stupidest fucking countries on Earth and seem to be exporting stupid now.

Hyperbole?  I think not.

Never mind the outrageously biased headline of the article itself.  OK.  Maybe just a mini screed to make myself feel better.  Smithfield Foods is “transforming” eastern Europe, eh?  The same way they “transformed” Mexican pig farms into viral breeding grounds? How about their “transformation” of the American pig industry into the shit-spewing, ground-water-polluting juggernaut that is killing us today? That’s like saying a rapist “transforms” his victims.  Ridiculous.  Words have meaning and the people we pay to use them are apparently oblivious to their intent.  Or maybe they know exactly what they are doing.  The jury is still out for me as to whether or not this is all some elaborate, complicated “long con” or just a horrible set of coincidences with enormous, global consequences.

At any rate, this blog really isn’t about the corporate propaganda machine and how they have convinced us to eat shit sandwiches as if they were North Carolina pulled pork.  Hey, back to pigs.  I love it when a segue comes together.   (Sorry, miguelito, this might be painful for you.  I’ll understand if you have to look away.)

I am not sure what is worse.  Our societal weakness for getting the shit kicked out of us and asking for more or the actual actions of those operating at the highest levels of that same society.  The ones doing the shit kicking.  Prepare for a lot of shit in this blog.  Our country is nearly overrun with it.  We are choking on it.  In case you didn’t read the NY Time’s piece yet, fucking Smithfield Foods is proud of their record of shit to cost ratio.

In the United States, Smithfield says it has been a boon to consumers. Pork prices dropped by about one-fifth between 1970 and 2004, according to the U.S. Department of Agriculture, suggesting annual savings of about $29 per consumer.

Wow!  A 20-percent cost saving over 34 years!  You mean, all we had to do to save fifty cents on a package of bacon is kill the American family farm and pollute our drinking water for generations to come?  Not to mention the damage done to our health eating the factory-farm offal they call food.  I bet we could reach fifty percent cost savings with the proper incentive.

What’s it going to take to keep our dirt-cheap BLTs?  Huh?  The tomatoes have salmonella?  WTF?  Whatever happened to farmers farming and MBAs running the store?  What made them think that they could actually perform that service to society?  OK.  I should stop before I say something rude.  Not every MBA is a ideological moron with the common sense of a gnat.  My best friend has both an MBA and a conscience as well as a fairly good grasp of reality, so I am convinced it is not the education so much as the environment.

That said, how did this environment come into being?  When did it start?  Who was responsible?

I think the destruction of the American family farm and the “transformation” of our food supply is every bit as damaging to our societal compact as torture memos. Where is the outrage over that shit?  (Not to belittle torture, but we’ve been torturing people for a long time in this country.  At least since the CIA started doing their thing as our foreign policy nut-crackers during the Cold War.  All perfectly justified at the time, of course.  Had to stop those dominoes from falling.)  We have allowed (for the umpteenth time) a small group of powerful men to control one of the most important, live-sustaining processes in this country for their own profit and our obvious detriment.  How is it that we keep letting this shit happen?  Are we fucking psychologically damaged in some fundamental way?  Is it all the corn?

I have no idea how to end this blog now.  It is all too big.  Like we really have no fucking clue what we are doing yet keep sending the same idiots back to the corner office to make the same dumb-ass mistakes while we figure it out.  I guess that is as good a place to end this as any.

Let me leave you with one last thought as we head into another election season.  Vote.  Every time the polls open.  Take at least one person (better two or three) with you who doesn’t usually go to the primaries, because they vote in the “real election” in November.  The general election is much too late to make a difference.  Drag their ass to the polls every time they open.  Then cajole that previously lackluster slacker into doing the same thing with someone else who doesn’t vote the next time they go to the polls in the spring.

Oh yeah, there is a special place in hell for this guy.